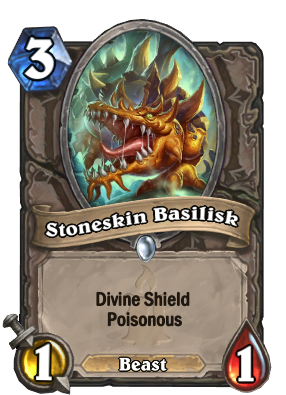 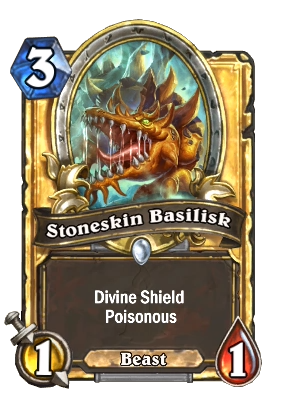 He got that way from looking into a mirror.

Stoneskin Basilisk is a common neutral minion card, from the Kobolds & Catacombs set. 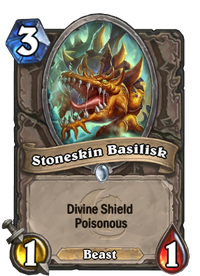 Stoneskin Basilisk can be obtained by:

Two copies of regular Stoneskin Basilisk (Core) are obtained for raising sum of all your class levels to 29.

Two copies of golden Stoneskin Basilisk (Core) are obtained for winning 500 games across all classes.

Stoneskin Basilisk (Core) is uncraftable and cannot be crafted or disenchanted.

This card joins Giant Wasp, Stubborn Gastropod, and Emperor Cobra as neutral options for cheap Poisonous beast minions. Its use of Divine Shield means that it requires at least two pings/attacks to die, increasing the chances it makes at least one effective trade.

Basilisks are heavily-armored, six-legged lizards which are related to the crocolisk. Basilisk stomachs are capable of dissolving nearly anything. Because of this, basilisks have a fondness for eating crystals and rocks from the area they inhabit. The basilisks of Azeroth long had a fondness for the legendary "singing crystals" that grow in Stranglethorn Vale. As a side effect of eating the crystals, the Basilisk have mutated: the mystical crystals now grow from their scaly hides, giving them even greater power against their enemies. This not only makes their hides extremely hard, but gives them a unique power. They're best known for their ability to petrify a person with their stare. Due to this, basilisk parts are often sought by mages and alchemists for study. These powerful, enchanted creatures are something of an anomaly throughout the land of Azeroth. They are also found on the alternate Draenor and likewise can turn their enemies into stone.