This article is using {{Card template}}.
See Help:Style guide/Card for how to edit this kind of article.
Edit this article
Stolen Goods
40566 • CFM_752
Regular 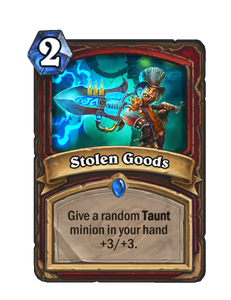 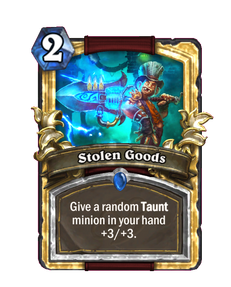 It fell off a kodo, I promise! 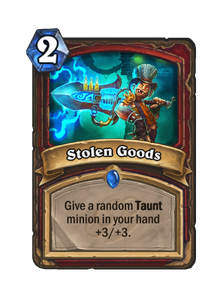 Stolen Goods is a rare warrior spell card, from the Mean Streets of Gadgetzan set.

Stolen Goods is an incredibly powerful buff for its price. It can be used after I Know a Guy to buff whatever you chose, or simply can be used with generally high-statted taunts like Public Defender, Bloodhoof Brave, and Alley Armorsmith.

However it is superiority outclassed by Into the Fray which costs 1 less mana, 1 less stat but providing buffs to all taunt Minions makes this card unused.

"Dis is my favorite part of being a Goon! We get the guns. And when I say guns, I mean the BIG guns, includin’ some very choice engineering.

Grapplehammer is a talented guy, and his people dole out upgraded gear through the city’s pawn shops. Basically, Goons stick together and we got all the best toys, so you ain’t never gonna get into a fight without some back up. Even the littlest guy can be a heavy hitter with the right pea-shooter in da violin case.

Us Goons always try to smuggle in some hardware before we get into a brawl. So, here’s how that works. When a fellow Goon is played, they’ll make arrangements for their back-up to get some of the weapons we stashed in Gadgetzan. That can come in the shape of some very beefy buffs to the minions in your hand. Just wait ‘til you get a load of the goods in Don Han'Cho's private stash!"[1]