This article is using {{Card template}}.
See Help:Style guide/Card for how to edit this kind of article.
Edit this article
Stiltstepper
61135 • DMF_229
Regular 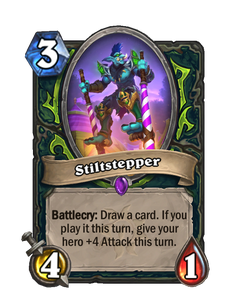 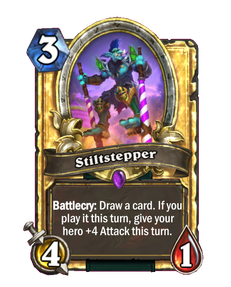 Dimensions: Full • 330 x 410px
Battlecry: Draw a card. If you play it this turn, give your hero +4 Attack this turn.
Flavor text

Circus school was tough, sometimes you had to step on people to make it to the top. 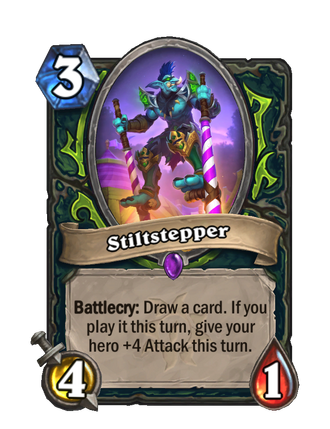 Stiltstepper is an epic demon hunter minion card, from the Madness at the Darkmoon Faire set.

A great card for fast aggro decks, Stiltstepper's power resides in its ability to not only allow for a burst of damage, but also provide fuel in the mid-to-late stages for an aggro deck. Decks using Stilitstepper should include as few cards as possible that cost 4-mana or higher, so that you can more reliably play it on turn 5 or 6 for maximum consistency.

The +4 Attack this card provides with it's battlecry is particularly devastating, but can only trigger if you meet it's condition. As a result, you will want to mulligan the card as you won't want to play it on turn 3 or turn 4, as its 1-health body usually will not connect with anything. The attack can be used to break through taunts or deal large burst damage to the enemy hero.

Stiltstepper is particularly strong in decks that use cheap outcast cards as they can be top-decked with the battlecry effect for a high impact turn.

Spectral Sight are great examples of this synergistic combination. Other cards frequently seen alongside Stiltstepper include cheap minions such as

Battlefiend, cheap damage spells such as Twin-slice and cards that generate value when you attack such as