This article is using {{Card template}}.
See Help:Style guide/Card for how to edit this kind of article.
Edit this article
Steward of Darkshire
38911 • OG_310
Regular 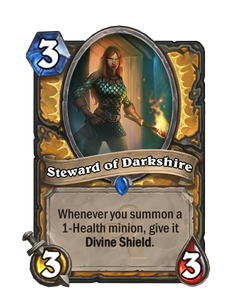 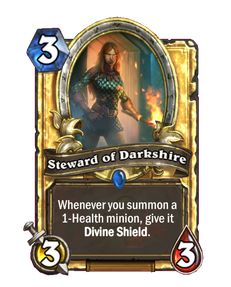 Dimensions: Full • 330 x 410px
Whenever you summon a 1-Health minion, give it Divine Shield.
Flavor text

Turns out divine shields are way cheaper if you buy in bulk. 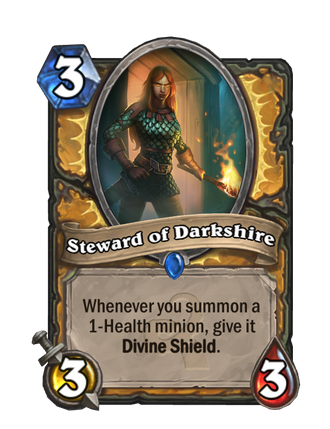 Steward of Darkshire is a rare paladin minion card, from the Whispers of the Old Gods set.

This card synergizes well with

Twilight Drake. It can also turn Charge minions with low Health like

Bluegill Warrior into effective board traders. It works well with Murlocs in general due to their overall low Health, activating for minions including

Bilefin Tidehunter (and the minions summoned by them),

Grimscale Oracle. This could enable very efficient trading in a Murloc Paladin deck.

This minion will grant shields to Silver Hand Recruits and other 'summoned' minions, giving it synergy with cards like

Stand Against Darkness and

Another fun combo is Steward of Darkshire,

Stand Against Darkness and

The Coin, or a cost reduction effect, since the full combos cost 11 mana. Nonetheless, both cards in general have strong synergy with Steward of Darkshire, especially if the player manages to have several Divine Shields active on their minions just before playing them.

In Wild format this card synergizes well with

Muster for Battle. This can be followed with

Minions with 1 health in Standard and Wild can be found here.

After years of defending their town against the terrors of Duskwood, the grim defenders of Darkshire are no strangers to horror or madness. The Steward of Darkshire is a true good-willed defender of her home, free of corruption by the Old Gods, as can be seen by the torch and lack of tentacles, and the Holy Light shining in her eyes.

The art for this card appears to depict Watcher Sarah Ladimore, but the Hearthstone character is likely unrelated.