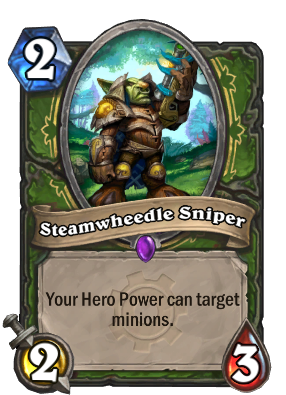 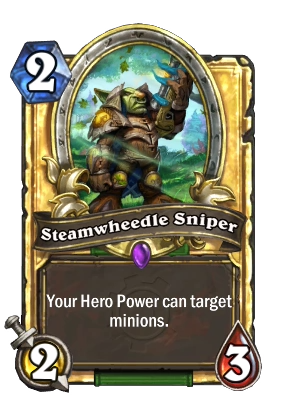 Goblins seldom have the patience for sniping. Most prefer lobbing explosives.

Steamwheedle Sniper is an epic hunter minion card, from the Goblins vs Gnomes set.

Steamwheedle Sniper can be obtained through Goblins vs Gnomes card packs, or through crafting.

Dealing 2 damage to minions at will is exceedingly useful and does not require any combos. Play this with strong independent minions that don't need other cards to work (i.e. not Beasts), leaving mana open for snipes. It is a particularly strong choice for decks based around Genn Greymane, giving hunters the ability to control the board.

Attack
In my sights.

The Steamwheedle Cartel is one of the largest and most successful of the Goblin Cartels in Undermine. It is a neutral organization that controls several cities and towns around the world, and has allied themselves with a number of other groups such as the Blackwater Raiders in Booty Bay. The Steamwheedle Cartel has made a great deal of profit from maintaining neutrality in the conflict between the Horde and the Alliance. Their services are always available to the highest bidder, employing anyone regardless of their affiliation if they can produce results.