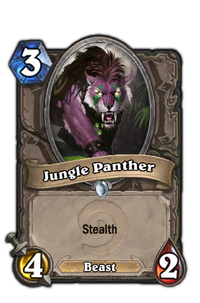 A minion with Stealth can't be attacked or targeted by enemy minions, spells, hero powers, or battlecry until it deals damage. You may target your own stealthed minions. Flare and Streetwise Investigator remove Stealth. Shadow Sensei empowers a Stealth minion.

Below is a list of all cards with the stealth mechanic.

Note: For the purposes of this list, only collectible cards are listed.

Knights of the Frozen Throne

One Night in Karazhan

Retrieved from "https://hearthstone.fandom.com/wiki/Stealth?oldid=33078"
Community content is available under CC-BY-SA unless otherwise noted.