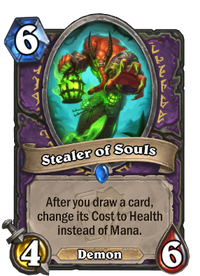 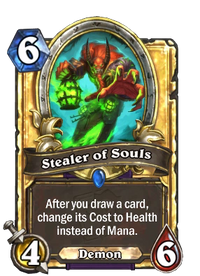 After you draw a card, change its Cost to Health instead of Mana.
Flavor text

Stealer of Souls is a rare warlock minion card, from the Wailing Caverns mini-set.

Stealer of Souls can be used to cheat big threats into play for no mana, allowing for huge tempo swings. Cards like Enhanced Dreadlord and Void Drinker can also be used to prevent incoming damage on the following turn, while Man'ari Mosher can recover large amounts of health. Stealer of Souls also pairs with card draw like Free Admission, Hand of Gul'dan, and even Backfire. If any of these are drawn, they can create more "free" cards, especially if they themselves draw into more card draw. While this can cost an extreme amount of health, the only hitpoint that matters is the last one. The huge swing turns are often worth the price.

Stealer of Souls is a jailer.

Jailers are a race of demons in service of the Burning Legion that carry fel cages on their backs. As their name suggests, they act as jailers and caretakers of the Legion's prisoners and use their cages to capture both the soul and body of their enemy, which they then send to the Twisting Nether to subject their victims to horrific torture and interrogation.