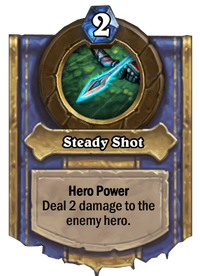 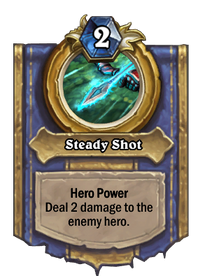 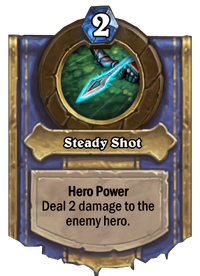 Steady Shot is one of most direct and in many ways least tactical of all the Hero Power: it deals a reliable and largely unpreventable 2 damage to the enemy hero.

Steady Shot is particularly useful for aggressive hunter decks, allowing them to deal a steady stream of damage even when unable to improve their board position or otherwise make progress that turn. By regularly using Steady Shot, a hunter can easily chip away at the opponent's Health, and quickly progress to the point of being able to defeat the opponent using burst damage, such as from an Unleash the Hounds/Timber Wolf play. Without healing or armor effects, it takes only 15 uses of Steady Shot to defeat the opponent, regardless of events on the board. Steady Shot can put constant, unavoidable pressure against the opponent, and when the opponent is close to dying, being able to use Steady Shot more often can be more beneficial than spending all your Mana to build a board.

Steady Shot is one of the most reliable Hero Powers, and is generally a good fallback when the turn doesn't present any strong card options to spend one's mana upon.

Against other Hero Powers[]

In comparison to Hero Powers such as the mage's Fireblast, Steady Shot offers no strategic options to control the board. However, its strength lies in its recurring, unpreventable damage. While more tactical Hero Powers are often weak without the right circumstances, Steady Shot can be relied upon to progress towards the hunter's win condition any stage of the game. Use-for-use, Steady Shot can put significant pressure on warlocks using Life Tap (although this can backfire with Handlocks), bypass Totemic Call minions completely, out-damage Fireblast and Dagger Mastery, and slowly grind down Shapeshifting druids. On the other hand, Armor Up! and Lesser Heal can evenly counter Steady Shot. Reinforce can potentially overwhelm the hunter with minions, although Steady Shot's immediate direct damage gives the hunter more initiative at low health.

Steady Shot is a hunter ability from World of Warcraft.