This article is using {{Card template}}.
See Help:Style guide/Card for how to edit this kind of article.
Edit this article
Starfire
823 • EX1_173
Regular 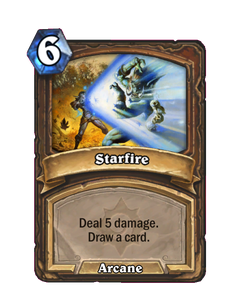 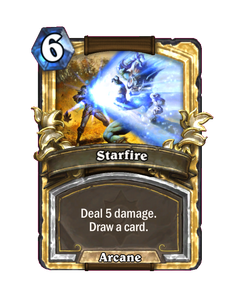 Balance is important to druids. This card is perfectly balanced. 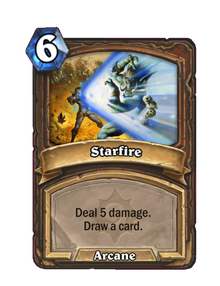 Starfire is a druid spell card, inducted into the Legacy set, formerly from the Basic set. 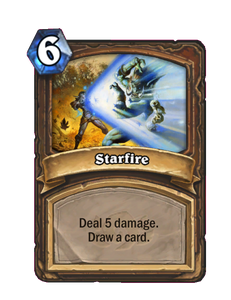 Regular and golden Starfire are uncraftable and cannot be crafted or disenchanted.

Starfire is a strong direct nuke which can be used in combination with weaker minions to take out large minions or finish off a low opponent. With its card draw effect serving to replace the card when played, Starfire is especially well-suited to slower decks. Starfire can be combined with Solar Eclipse for a Pyroblast that draws 2 cards for 2 less mana

"The very heavens echoed the druid's rage and opened up at his command."

Starfire is a balance druid ability that deals large amount of arcane damage and generates Solar Energy, helping build towards a Solar Eclipse.