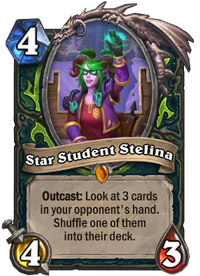 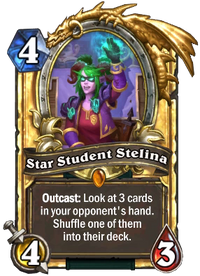 Outcast: Look at 3 cards in your opponent's hand. Shuffle one of them into their deck.

Star Student Stelina can be obtained through Scholomance Academy card packs, through crafting, or as an Arena reward.

Star Student Stelina is very useful of removing key important cards like combo cards or removal cards and sends it back to their deck which their opponent loses an option to answer against the board or delay their combo by several turns. Great card targets are Highlander cards like Reno Jackson or Zephrys the Great, Combo cards like Aviana, and Game changing cards like N'Zoth, the Corruptor or C'Thun, the Shattered, or powerful effects like Brann Bronzebeard.

Star Student Stellina is unique to Hearthstone. Judging from her interactions during Duels, she is apparently one of the brightest students in Scholomance Academy. However, she doesn't appear to be above cheating to maintain her 'perfect record.'