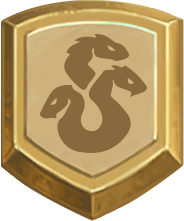 Standard format (or Standard) is one of Hearthstone's three game formats in Constructed. Standard format is intended to feature a fresher and more focused Hearthstone experience, with a limited pool of cards allowing greater design space, a more dynamically shifting meta, more balanced play, and an easier entry for new players.

Games played in Standard format are restricted to cards from card sets released in the previous two calendar years, in addition to the Core set. The lack of older expansion sets makes Standard format friendlier for new players.

During Standard matches, random effects that produce cards are also restricted to only choosing from Standard sets, although non-random effects worded to generate specific Wild cards continue to function normally.

Standard is available as a format in Constructed matches (Ranked and Casual), and Friendly Challenges. In addition, Tavern Brawls may occasionally use Standard format.[1] Standard is the default format for new players, and is used in all official tournaments such as the Hearthstone Grandmasters and Hearthstone World Championship.

Standard format is updated annually when the first new expansion of the year is released, marking the start of the new "Standard year". Standard format was released together alongside Whispers of the Old Gods and Wild format on April 26, 2016.[2] At that time, Curse of Naxxramas and Goblins vs Gnomes were sent to the new Wild format, making cards from those sets unavailable in Standard format play.

The following card sets are currently available in Standard format with the Year of the Hydra.

For playing in other game formats, see Game format.

Players are able to select Standard format through the Constructed selection screen, or when challenging a friend to a Friendly Challenge. An icon shows the current Standard year's zodiac if Standard is selected. Matches played in Standard format will always see both players obeying the format's restrictions; players queuing for a Standard format match will never be matched against players from other formats.[1]

When playing a Standard game, players may only choose decks which are built entirely from Standard card sets, within the rotating two-calendar year window. In the deck creation or selection screens, Standard-legal decks are displayed with plain unadorned borders, while those containing Wild cards show a thorny vine wrapped around the border. Deck builders can convert a Wild deck to Standard using a button when hovering over the deck name, in which case Wild cards in the deck will be marked to allow for easy replacement. When editing a Standard deck, Wild-only cards from the player's collection are not displayed. The conversion can also be reversed, removing the restrictions on adding Wild cards to the deck.

During Standard games, cards that provide access to other cards randomly will only select from Standard sets, whereas in Wild they would be able to select from all cards. Mechanics restricted this way include summoning or transforming into random minions.[1][3] This focuses the gameplay on the more refined set of cards in the format, and prevents players from using random chance to access cards that have been restricted from the format. On the other hand, cards which specifically generate cards from other sets remain fully functional in Standard. For example, during the Year of the Kraken, Ball of Spiders was valid even though the Webspinners it generated were from three years earlier in the Curse of Naxxramas set.[4] Toki, Time-Tinker was another example as she was able to add a random legendary minion from Wild format into the player's hand.

The release of the first expansion each year marks the start of a new "Standard year" in Hearthstone, also referred to as a "Hearthstone year".

Note that the selection is not updated upon release of expansions past the first in any given year. This was intentionally designed in order to minimize the disruption caused by players having to constantly adjust their decks being invalidated by the frequent changes in the format, which can be especially disorienting to returning players.[5][6]

The following table is the card set rotation schedule for Hearthstone. The highlighted sets are in Standard format.

There are currently no plans for older card sets to be reintroduced into Standard later on.[1]

With the introduction of Standard and Wild formats in 2016, each Hearthstone year is now symbolized by a zodiacal constellation formed from stars in Azeroth's night sky to differentiate each different year in Standard.[1] The lore behind this is that the new year is heralded by a new constellation coming into alignment above Azeroth, marking "a time of jubilation and raucous revelry wherever Hearthstone is played".[1] Each year's constellation is marked by a different beast.

The current year's zodiac animal acts as a symbol for Standard format, as seen on the game format selection button on the Constructed screen.

For the history of game formats, see Game format#History.