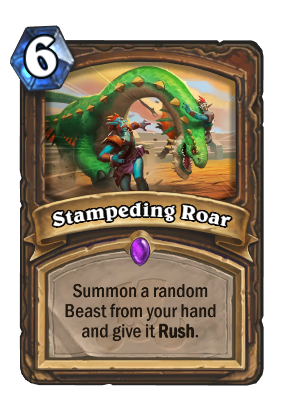 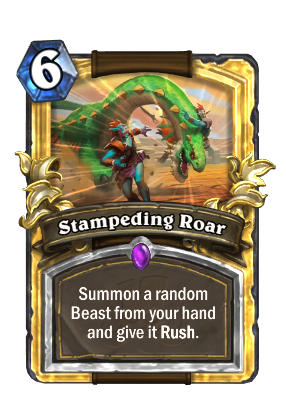 Summon a random Beast from your hand and give it Rush.
Flavor text

The Gurubashi Arena has an extremely permissive policy on pets in the workplace.

Stampeding Roar is an epic druid spell card, from the Rastakhan's Rumble set.

Stampeding Roar can be obtained through Rastakhan's Rumble card packs, or through crafting.

Stampeding Roar is a World of Warcraft druid ability that increases the movement speed of all nearby friendly players by 60% for 8 seconds. It can be used in both Bear Form and Cat Form.

Brutosaurs are enormous, long-necked dinosaurs native to Zandalar. They are used by the Zandalari Empire as both weapons of war and enormous, mobile trading posts. Trained to haul goods throughout Zuldazar, brutosaurs offer a slow but steady ride around the city's terraces.