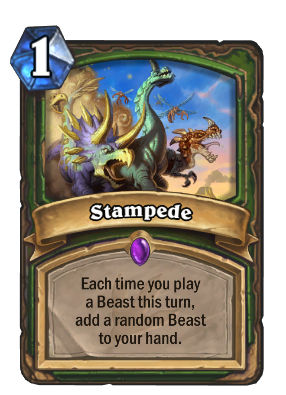 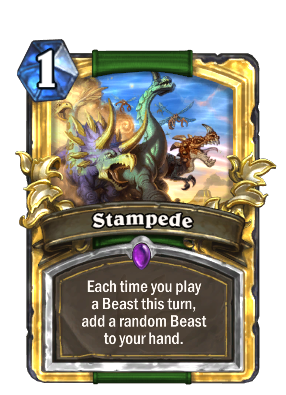 Each time you play a Beast this turn, add a random Beast to your hand.
Flavor text

Many hunters long for the pitter-patter of enormous feet.

For the Tavern Brawl spell, see Stampede (The Dark Wanderer).

Stampede is an epic hunter spell card, from the Journey to Un'Goro set.

Stampede can be obtained through Journey to Un'Goro card packs, or through crafting.

This spell lets you flood the board without losing card advantage. Similar to Lock and Load, this card is best used with several cheap beasts. Since the effect always guarantees a beast will be created, you can create a chain of beasts with only a single one originally in your hand. Beware of cards like Ultrasaur though, as these will end the chain prematurely.

Stampede is a Beast Mastery Hunter ability that summons wild animals to attack a target.