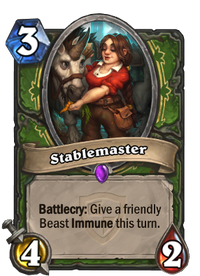 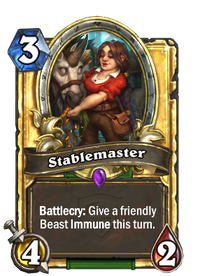 Battlecry: Give a friendly Beast Immune this turn.
Flavor text

Takes way better care of her pets than her brother, Unstablemaster.

Stablemaster is an epic hunter minion card, from the Grand Tournament set.

Stablemaster can be obtained through The Grand Tournament card packs, or through crafting.

This minion is OK in a hunter Beast deck because like Bestial Wrath it lets your Beasts that are already in play destroy/damage your enemy's minions without taking damage themselves, thus allowing you to improve your position on the board. The downside to this card is that the minion itself has poor stats for a 3 drop, meaning it is best to only play it when you can take advantage of its Battlecry. Best played in a deck with many Beasts, to ensure ample opportunity for making the most of its effect.

Stable masters are NPCs which allow players to heal and revive battle pets, recover lost companions and stable hunter pets. They are found in all cities and most towns and settlements. There are also numerous named characters within World of Warcraft that bear the title "Stable Master".

Stable masters are typically found outside most city and town inns or near the pet trainers. You can ask the city guards where they are when you are in major cities. In other locations where city guards are not present the minimap tracking feature will show a horseshoe icon at their locations.