This article is using {{Card template}}.
See Help:Style guide/Card for how to edit this kind of article.
Edit this article
Sprint
630 • CS2_077
Regular 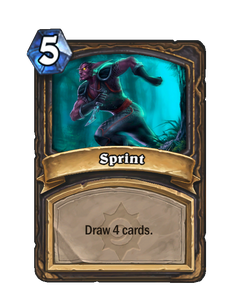 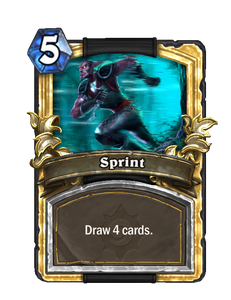 Rogues are not good joggers. 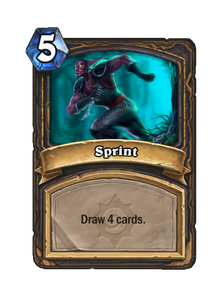 Sprint is a rogue spell card, inducted into the Legacy set, formerly from the Basic set. 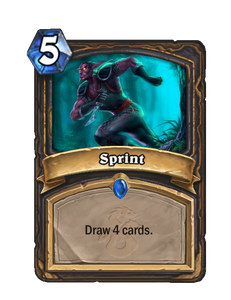 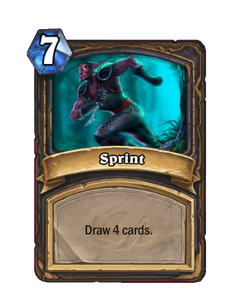 Regular and golden Sprint are uncraftable and cannot be crafted or disenchanted.

Two copies of regular Sprint are obtained for raising rogue to level 5.

Two copies of golden Sprint (Core) are obtained for winning 100 games as rogue.

Sprint (Core) is uncraftable and cannot be crafted or disenchanted.

Sprint is the second most powerful self-contained card draw effect in the game, the first being Ultimate Infestation. However its high mana cost may prevent the rogue from playing many other cards that round.

The rogue deck features a lot of low mana-cost cards which might result in a lack of cards during the late-game of a match. In order to prepare a transfer of an achieved early-game advantage through low mana cost cards, rogues can use Sprint to not lose the momentum to high sustain decks such as the shaman's or priest's.

Preparation can mitigate this card's mana cost, allowing you to either play it earlier or play more cards in the same turn to avoid losing too much tempo.

Sprint is a rogue ability from World of Warcraft which grants a very large movement speed boost for 8 seconds. It can be used for quickly getting close to ranged opponents, running down fleeing enemies, or escaping combat when things turn sour.