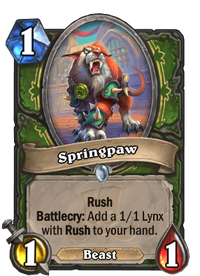 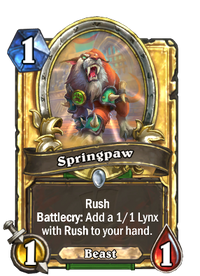 Rush
Battlecry: Add a 1/1 Lynx with Rush to your hand.

Springpaw is a common hunter minion card, from the Rastakhan's Rumble set.

Springpaw can be obtained through Rastakhan's Rumble card packs, or through crafting. 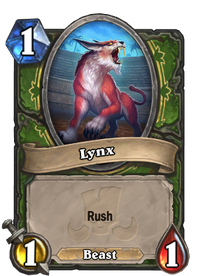 Springpaws are very weak on their own, even among 1-mana minions. Dire Mole and Goldshire Footman have more staying power, while Acherus Veteran and Timber Wolf are better on offense.

However, Springpaw's true purpose shines when supported by other cards. Toxmonger allows Springpaw and the generated Lynx to effectively remove 2 minions from the board immediately with Rush. Support from Leokk give the player an efficient 4 damage for 2 mana. Springpaw and Lynx also serve as great fodder for Scavenging Hyena, potentially giving a huge early-game lead if the hyena is on the board on turn 1-2. If the enemy has a minion, you can send your Springpaws/Lynxes in to die and effectively gain a 6/4 hyena by turns 2-3, potentially more if you draw 2 Springpaws. Combo with Revenge of the Wild for a very large hyena. Finally, as 1-mana minions, they are effective at helping to complete the Hunter quest, The Marsh Queen.

Lynxes are red or brown big cats mainly found in Quel'Thalas, but also on the Echo Isles, as well as Netherstorm and the Blade's Edge Mountains in Outland. They are vicious hunters that shred their prey with fang and claw.

The springpaw lynxes of the Eversong Woods are known for their high quality pelts, and even night elves have been known to travel to Quel'Thalas just to poach them. The springpaws of Sunstrider Isle succumbed to the influence of the Burning Crystals, forcing the local blood elves to put them down.

Springpaw Lynxes and Springpaw Cubs are a common sight in the Eversong Woods, as are the more powerful and hostile Springpaw Stalkers.