This article is using {{Card template}}.
See Help:Style guide/Card for how to edit this kind of article.
Edit this article
Spreading Plague
42656 • ICC_054
Regular 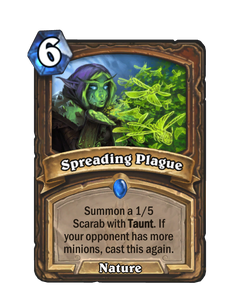 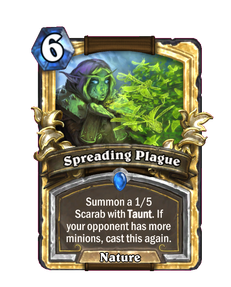 Dimensions: Full • 330 x 410px
Summon a 1/5 Scarab with Taunt. If your opponent has more minions, cast this again.
Flavor text 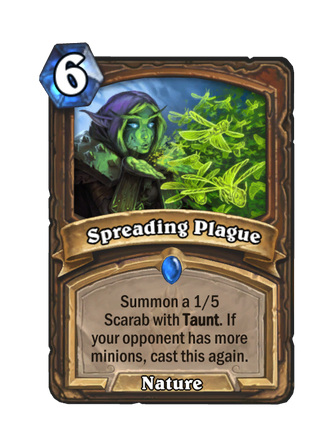 Spreading Plague is a rare druid spell card, from the Knights of the Frozen Throne set. 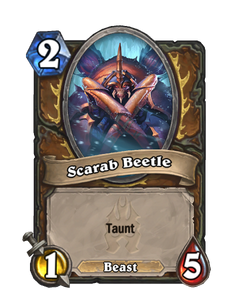 Spreading Plague is best played when your enemy has many more minions than you do, since it can quickly flood your board with 1/5 taunt minions for a reasonable cost. Avoid playing it when you have equal or more minions than your opponent, as summoning a single 1/5 Taunt minion for 6 mana is extremely cost-inefficient.

Having multiple 1/5 taunts is often enough to stall a few turns. Their 1 attack isn't great, but having 5 health allows them to be durable. Although this is especially helpful against aggro decks that tend to flood the board with small minions, it should be noted that stalling with no plans of potential stabilization is often not the best play. Instead, it should be considered to hold on to Spreading Plague until a winning position can be achieved immediately after.

Strongshell Scavenger; even at 10 mana, a board filled with 3/7 taunt minions is a strong play.

In taunt-specific decks, this card works well with

Crypt Lord, as it will gain +1 health for each minion summoned. Summoned minions can also be revived with the effect of

Hadronox; while more impressive taunt minions such as

The Lich King are generally preferred, there are situations where it will be more beneficial to summon a large mix of weak and strong taunt minions rather than one or two powerful ones.

Each Scarab Beetle summoned with Spreading Plague is a beast, meaning they synergize well with druid cards such as