This article is using {{Card template}}.
See Help:Style guide/Card for how to edit this kind of article.
Edit this article
Spreading Madness
38456 • OG_116
Regular 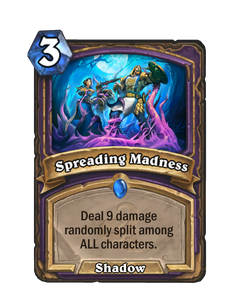 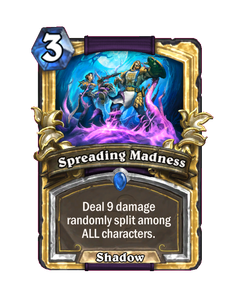 Most citizens of Darkshire wear those surgical masks to prevent spreading Madness to tourists. 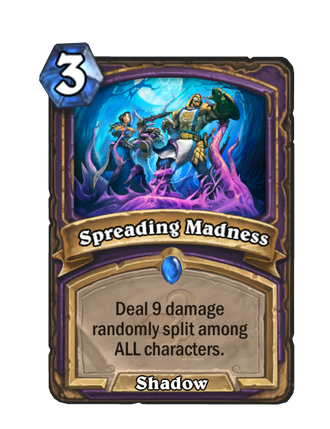 Spreading Madness is a rare warlock spell card, from the Whispers of the Old Gods set.

This spell shoots 9 missiles, each one dealing 1 damage to a randomly selected character:

This spell spreads the maddening whispers of the Old God Yogg-Saron.

Yogg-Saron is just CRAZY for madness, and the insidious power of its whispers easily takes mortal minds one step beyond. Of course, every good (bad?) Warlock knows that if you want to make it through the day, you’ve got to embrace a little trousers-on-head craziness. Who wouldn’t cast a spell like this and say, “Welcome to the house of fun!”[1]