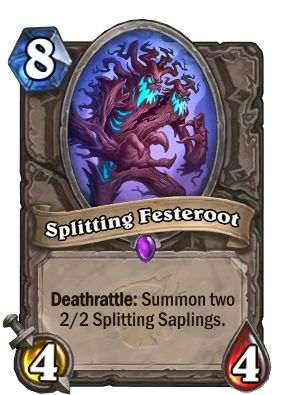 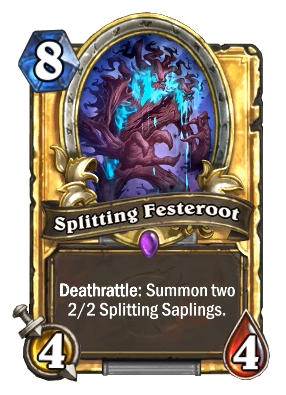 No use crying over split Festeroot.

Splitting Festeroot is an epic neutral minion card, from the The Witchwood set.

Splitting Festeroot can be obtained through The Witchwood card packs, or through crafting. 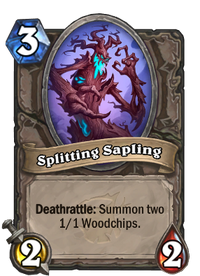 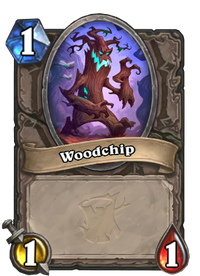 Splitting Festeroot is a very sticky, late-game card, comparable to Savannah Highmane or Violet Wurm. However, its overall 12/12 worth of stats, on first glance very impressive, is undercut by the fact that you can only have up to 4/4 worth of said stats at any given time: abysmal for 8 mana. Cards that help "pull" big minions can get its powerful effect out cheaply, but the same can be said for more powerful minions such as The Lich King or Tirion Fordring.

This card works well in Deathrattle-oriented Hunter decks, where a variety of cards can amplify or gain power off of its effect.

It also synergizes with Awaken the Makers in Priest, giving you 3 deathrattle minions in one card. Priest also has effects which can duplicate its effect, such as Mirage Caller and Vivid Nightmare.