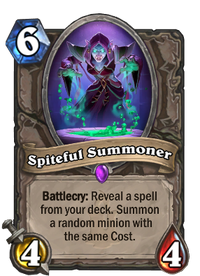 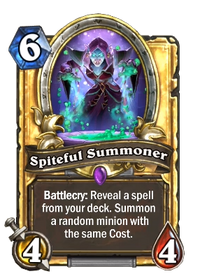 Battlecry: Reveal a spell from your deck. Summon a random minion with the same Cost.

Sometimes she'll summon a Doomsayer. Out of spite.

Spiteful Summoner is an epic neutral minion card, from the Kobolds & Catacombs set.

Spiteful Summoner can be obtained through Kobolds & Catacombs card packs, or through crafting.

This card is best used in decks with high-cost spells such as Twisting Nether, Mind Control and Ultimate Infestation. That way, the minion summoned is more likely to be more powerful. In this way, Spiteful Summoner synergizes well Mage decks focused around Dragoncaller Alanna.

When constructing a deck with Spiteful Summoner, it's crucial to include a small selection of high-cost spells, as any low-cost spells could accidentally be revealed and result in much less value. Good examples include a Druid deck with its only spell being Ultimate Infestation, or a Priest deck that only runs Soul Mirror, Free From Amber and Mind Control.