This article is using {{Card template}}.
See Help:Style guide/Card for how to edit this kind of article.
Edit this article
Spiritsinger Umbra
41289 • UNG_900
Regular 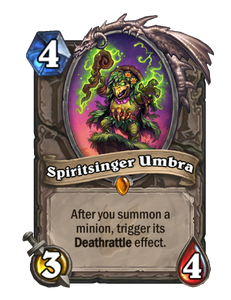 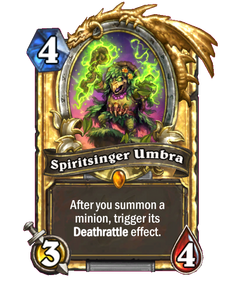 She sees the fate of anyone she meets, but it's always the same: dinosaur attack. 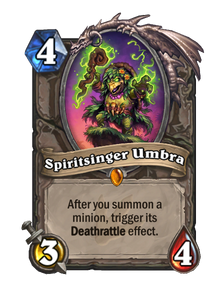 Spiritsinger Umbra is a legendary neutral minion card, from the Journey to Un'Goro set.

This card has a very strong effect and will snowball out of control if your opponent doesn't deal with it. It essentially gives minions a Battlecry that activates their Deathrattle, while still having them keep their Deathrattle for when they die. This minion shouldn't be played solo but instead combined with a valuable Deathrattle minion on a later turn, otherwise, your opponent can easily remove it due to its low stats.

Since the condition is summon and not play, Umbra works with Deathrattle minions that are directly summoned, such as Living Mana and Dreadsteed. Rattlegore in particular can be a game ending combo, although cost reductions need to have taken place. However, it won't work with Deathrattle buffs, like Ancestral Spirit or Spikeridged Steed, since those aren't being summoned.

Umbra also combines extremely well with the Priest quest, Awaken the Makers, and is an easy fit into N'Zoth, the Corruptor decks.

A very effective combination is to combo it with a Carnivorous Cube and a strong minion. When you destroy another one of your minion while Umbra is in play, it instantly creates two copies of it. Later when the Cube is destroyed, it creates two more, resulting in four copies of a minion. When used on a Deathrattle minion, this effectively gives you use a single Deathrattle 5 times. It also works well with a Charge minion if you can keep one alive or find a way to summon one for free. The best minion for this is Doomguard that was summoned with a Skull of the Man'ari, and the Cube can be killed the same turn with Dark Pact or Sanguine Reveler, dealing 25 damage for 10 mana. Moat Lurker can also be used instead of a Carnivorous Cube, but is much less effective.

Summon
The greatest virtue is patience.

Umbra is the leader of the tortollans of Un'Goro Crater. After Professor Doyle and Eddie Malone were rescued from a group of saurok by the tortollans, Eddie asked Umbra for help in finding the other expedition members. Umbra simply smiled and said "The greatest virtue is patience".[3]

After Doyle and Eddie spent a few days in a murloc village atop the back of a gentle megasaur, Umbra shouted something to the murloc leader and pointed in the direction of the Volcano in the center of Un'Goro, causing the entire village to begin moving in that direction. When they arrived at the foot of the volcano, Umbra took the two explorers aside and told them to climb the "fire mountain" to see "the truth", leaving Eddie to wonder what she meant.[4]

Like the rest of the tortollans featured in the expansion, Umbra is unique to Hearthstone.