Spirit of the Tiger

This article is using {{Card template}}.
See Help:Style guide/Card for how to edit this kind of article.
Edit this article
Spirit of the Tiger
50031 • TRL_309
Regular 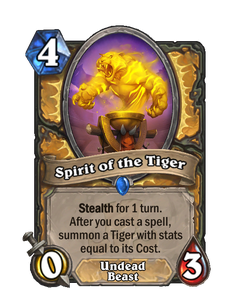 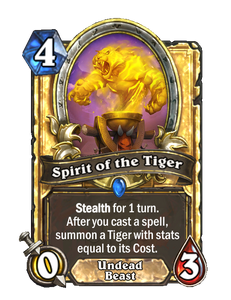 Dimensions: Full • 330 x 410px
Stealth for 1 turn. After you cast a spell, summon a Tiger with stats equal to its Cost.
Flavor text

Less of a cantrip and more of a cat-nip. 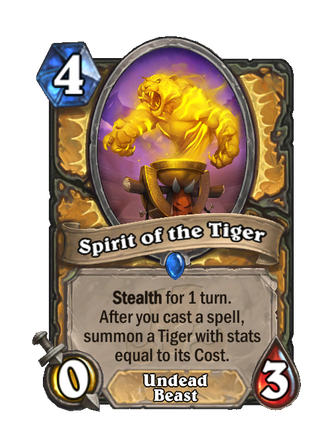 Spirit of the Tiger is a rare paladin minion card, from the Rastakhan's Rumble set. 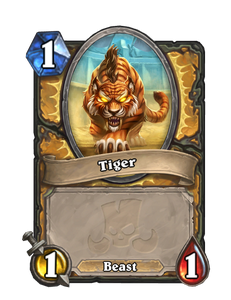 Spirit of the Tiger is a card that can generate a lot of value, so it's more effective if it can be protected by buffing its Health or hiding it behind a Taunt.

Despite being value-oriented, it can provide huge tempo swings in the right situation, for example by using

Consecration against a board with small minions.

The Spirt can be used along

Shrink Ray as a Last Resort. It will weaken the Spirit, all the enemy board, and summon a 5/5 Tiger.

The Tigers don't have any instant impact, so,

Righteousness and similar effects can help minimize this weakness.

The Spirit of the Tiger is, as the name suggests, a spiritual manifestation[4] of Shirvallah, the tiger loa.