This article is using {{Card template}}.
See Help:Style guide/Card for how to edit this kind of article.
Edit this article
Spirit of the Shark
49972 • TRL_092
Regular 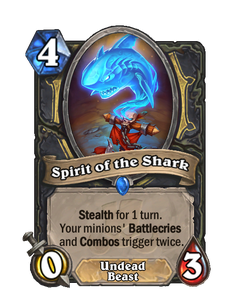 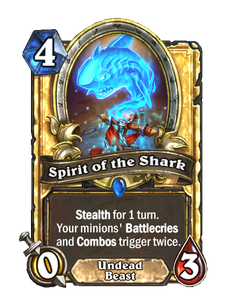 It has Stealth, but its ominous theme music keeps giving it away. 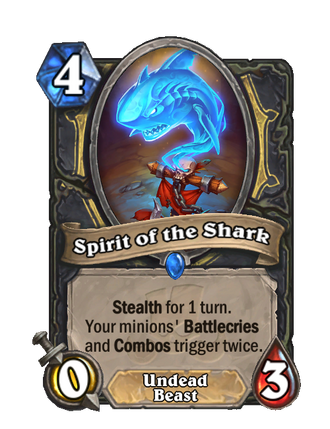 Spirit of the Shark is a rare rogue minion card, from the Rastakhan's Rumble set.

This card serves a similar purpose to Brann Bronzebeard, doubling the value of your Battlecry minions. As Brann is frequently killed at the first opportunity, Spirit of the Shark's Stealth dramatically increases its survivability, frequently allowing for explosive plays the turn after it enters play. It can also work with Combo effects, benefiting strong Rogue cards like

SI:7 Agent. Its costs is significantly more prohibitive however, making it harder to combine cards on the same turn as this or surprise your opponent.

While the player will not benefit from having two copies of Spirit of the Shark on the battlefield, including both in a deck creates a greater chance of drawing one early in the game and allows you to use the effect again after one is killed.

This card is extremely beneficial to

Edwin VanCleef, playing it on the same turn alone will result in Edwin becoming a 3-mana 6/6, tripling his vanilla stats, with the potential for even more, especially with Rogue's access to low-cost spells, such as

The Spirit of the Shark is, as the name suggests, a spiritual manifestation of Gral, the shark loa.[1]