Spirit of the Rhino

Edit
Spirit of the Rhino
Regular 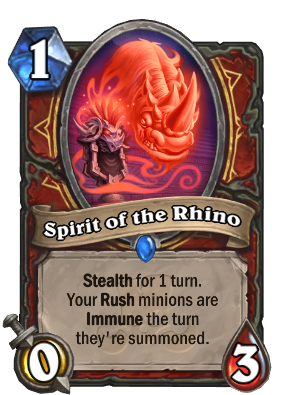 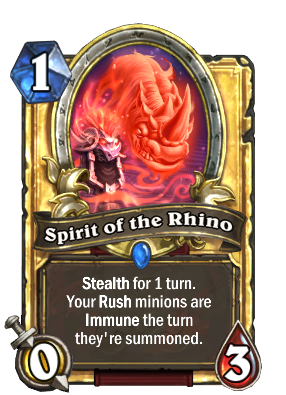 Stealth for 1 turn. Your Rush minions are Immune the turn they're summoned.
Flavor text

Where did they get this preposterous hypothesis?

Spirit of the Rhino is a rare warrior minion card, from the Rastakhan's Rumble set.

Spirit of the Rhino can be obtained through Rastakhan's Rumble card packs, or through crafting.

The Spirit of the Rhino is a cheap and powerful card in Rush Warrior decks. Rush minions' greatest weakness is that their health typically goes down fast due to their main purpose being favorable trading. This card allows Rush minions to hit an enemy minion while keeping their health for the next turn, allowing the warrior to get rid of their opponent's minions while maintaining strong board presence.

In particular, this card pairs well with Darius Crowley and Akali, the Rhino. Darius can kill a minion and immediately gain +2/+2 without hurting himself. Akali's low health is not an issue with Spirit of the Rhino as it protects him the turn he is summoned. This could potentially even allow Akali's powerful Overkill effect to activate a second time if the enemy is not quick in dealing with him.

The Spirit of the Rhino is, as the name suggests, a spiritual manifestation[1] of Akali, the rhino loa.

The flavor text is a reference to the "Flight of the Conchords" song, "Hiphopopotamus vs. Rhymenoceros".