Spirit of the Frog

This article is using {{Card template}}.
See Help:Style guide/Card for how to edit this kind of article.
Edit this article
Spirit of the Frog
49804 • TRL_060
Regular 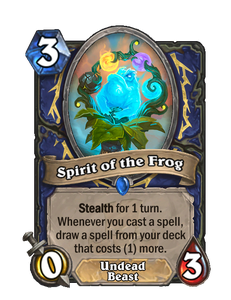 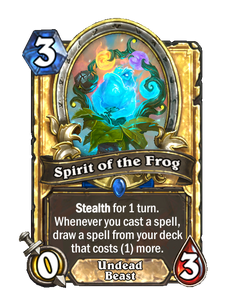 Dimensions: Full • 330 x 410px
Stealth for 1 turn. Whenever you cast a spell, draw a spell from your deck that costs (1) more.
Flavor text

It is Wednesday, my dudes. 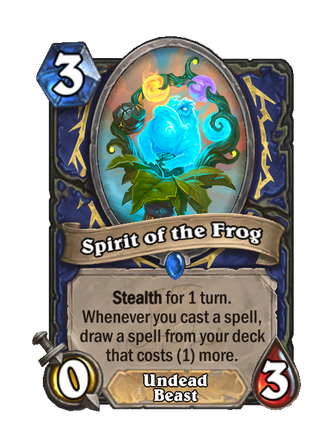 Spirit of the Frog is a rare shaman minion card, from the Rastakhan's Rumble set.

Spirit of the Frog uses discounted costs for its calculation. A spell discounted from 2 to 0 will draw a 1 mana spell.

The Spirit of the Frog is, as the name suggests, a spiritual manifestation[1] of Krag'wa, the frog loa.