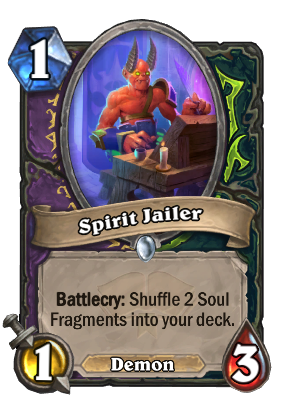 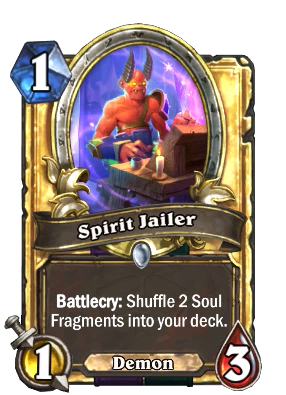 "Sure, they're in your deck, but the mind is like, the REAL prison."

Spirit Jailer can be obtained through Scholomance Academy card packs, through crafting, or as an Arena reward. 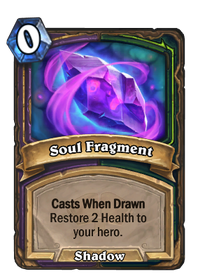 Warlock: Compared to the Flame Imp, the Spirit Jailer is a minion with far less aggressive stats and battlecry, shuffling in Soul Fragments that will heal the warlock later. This means that this cards is far better in Control Warlock than Zoolock where, in addition to the long-term healing, can help activate Void Drinker for a powerful 7/8 for 5 mana or Soulciologist Malicia for a huge swing turn. One can also use Felosophy for twice the amount of Soul Fragments.

Demon Hunter: This is one of the least aggressive minions that Demon Hunter has access to, leaving far less pressure when played compared to Battlefiend. However, depending on the deck, this card can allow for either Control or Aggressive playstyles. For Control, Shardshatter Mystic clears out smaller threats from the board. For Aggro, Soulshard Lapidary gives the hero +5 attack for the turn alongside a threatening 5/5 body. Soulciologist Malicia also provides great swing turns. These powerful cards make the inclusion of the relatively weak Spirit Jailer far more appealing.

Judging from the orange skin, shape of its horns, and ability to trap souls, this demon appears to be a juvenile version of a Jailer demon. These demons capture the souls of those who have fallen to the Burning Legion, using them to power their demonic machines and fel magic.