"Spiders have overrun everything, including your deck! Whatever class you play, your deck will be TEEMING with Webspinners."

Spiders, Spiders, EVERYWHERE! is a Tavern Brawl. It debuted on July 1, 2015. For exact times, see the schedule.

The second appearance of this Brawl was a stand-in for Captain Blackheart's Treasure, the debut of which was prevented by technical difficulties.[1] After a short period during which players were unable to access Tavern Brawls, the latter Brawl was replaced with Spiders, Spiders, EVERYWHERE!.

Spiders, Spiders, EVERYWHERE! sees players doing battle with special decks, each packed with copies of Webspinner. Players can choose any class, with each match generating a unique deck featuring 7 randomly selected spells for that class, and 23 Webspinners.[2][3]

With a strong RNG element, success in this Brawl requires foresight and adaptability to the vast range of possible spells and Beasts. 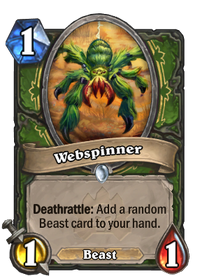 Below are listed all collectible Beasts available in Wild format, reflecting the range of minions that may be generated by Webspinner's Deathrattle:

The Hunter class is a good choice for this challenge due to the synergy of this class with Beasts. Cards such as Kill Command will usually find a Beast to interact with. Explosive Trap will also be problematic for your opponent since the board will likely be filled with 1 health creatures while Freezing Trap can help deal with some very powerful minions spawned from Webspinner's Deathrattle, like King Krush. Starving Buzzard can be a formidable draw engine later in the game. Be careful not to overdraw and remember that cards like King Mukla can fill your hand. Feign Death played when your side of the board has several Webspinners is one way of achieving card advantage in this Tavern Brawl.

It is generally better to trade Webspinners whenever you can because their deaths function as a form of card draw. Doing this at the start of your turn allows you to potentially put out a stronger Beast while all your mana is still available. Removing enemy Webspinners with your own reduces the chances that the enemy can grow a Scavenging Hyena out of control and gives you the opportunity to get one yourself. When trading Webspinners, do it slowly and one at a time because of the possibility of drawing game changing Beasts such as Scavenging Hyena, Timber Wolf, King of Beasts and Dire Wolf Alpha.

As almost every minion in this Tavern Brawl is a Beast, Tundra Rhino essentially gives all your minions Charge when you play them from your hand. Being able to Charge Webspinners to their deaths and obtain more Beasts that can Charge often causes a tempo swing that is difficult to recover from. Kill or Silence an enemy Rhino at all costs.

Another interesting class to choose is Priest. In that case, the game plan will be to be able find high-health minions and heal them up as you remove smaller threats. Mass Dispel can also be used to prevent the opponent drawing often between 3-5 cards from their Webspinners, causing them to run out of steam. Mass Dispel is one of the reasons not to trade your Webspinners into the opponent's early.

As the 7 spells granted by the game are random based on the chosen class, removal spells are at a premium. Classes with more removal spells such as Rogues, Mages and Shaman tend to do slightly better, while Warlocks with multiple spells that provide no benefit (Sense Demons, Sacrificial Pact, Demonwrath) are significantly weaker.