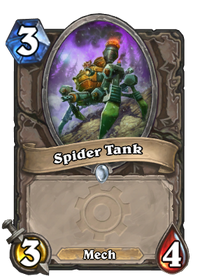 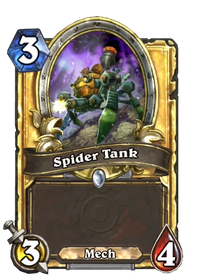 "What if we put guns on it?" -Fizzblitz, staring at the spider-transportation-machine

Spider Tank is a common neutral minion card, from the Goblins vs Gnomes set. 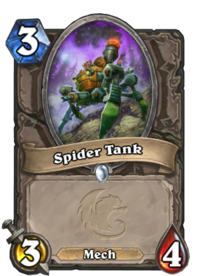 Spider Tank can be obtained through Goblins vs Gnomes card packs, or through crafting.

Two copies of regular Spider Tank (Core) are obtained for raising sum of all your class levels to 1.

Two copies of golden Spider Tank (Core) are obtained for winning 500 games across all classes.

Spider Tank (Core) is uncraftable and cannot be crafted or disenchanted.

Spider Tank is a reasonable minion notable mostly for its Mech type. While it lacks any special abilities, its Mech type allows for synergy with a variety of other cards.

It passes the "vanilla test" at 3/4 for 3 mana, basically being a neutral Mech version of Dark Cultist. With its value it can trade 2 for 1 against a 3/2 plus another minion, making it a decent early game play in its own right.

Its Mech type allows synergy with neutral cards such as Tinkertown Technician and class cards such as Upgraded Repair Bot and Goblin Blastmage.

Mechano-tanks, often called spider tanks, are mechanical tanks with a spider-like design. Making their first appearance in World of Warcraft, these tanks were designed by the gnomes of Gnomeregan to help defend their city and aid their allies. The leper gnomes, having taken control parts of the city after Gnomeregan was irradiated by Mekgineer Thermaplugg, now pilot the ones left behind. The tanks are often either equipped with machine guns or a flame thrower. They are also capable of jumping great heights.

While gnomish inventions, the goblin leader Jastor Gallywix is also known to ride a spider-tank.