"Choose your spellbook carefully, champion! Pick 10 cards, and anytime you would draw a card, you instead Discover a copy of a card from your deck."

This Tavern Brawl sees players doing battle with custom decks composed of 10 cards chosen by the player, with only 1 copy of each card allowed. At the start of the game, both players mulligan as normal, but at the start of each turn instead of drawing a card, the player will instead Discover a card from three options matching cards currently in their deck. This Discover does not remove the card from the player's deck, but instead places a copy into their hand.

Card draw effects do not operate normally during this Brawl: instead of drawing a card from the deck, the player has a copy of Peruse added to their hand. (This is technically considered card draw but does not come from the deck.) This 1 mana spell can then be used to Discover a card in the same way that players gain new cards at the start of each turn. Put into hand effects similarly generate copies of Peruse.

The combination of these special rules means the player is unable to draw cards normally, but the contents of the deck can still be altered through put into battlefield, shuffle into deck, and replace effects, as well as unique cards like Fel Reaver and Tracking. Because the deck acts as a source for each turn's Discover effect, altering the contents of the player's deck will affect which options the player is able to Discover. 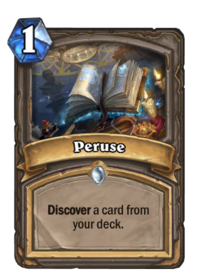