This article is using {{Card template}}.
See Help:Style guide/Card for how to edit this kind of article.
Edit this article
Spellbender
366 • tt_010
Regular 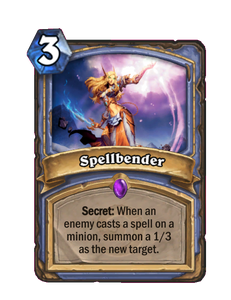 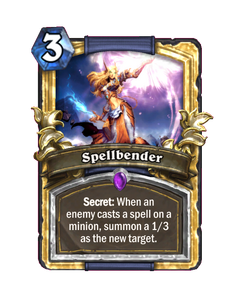 While it's fun to intercept enemy lightning bolts, a spellbender much prefers to intercept opposing Marks of the Wild. It just feels meaner. And blood elves... well, they're a little mean. 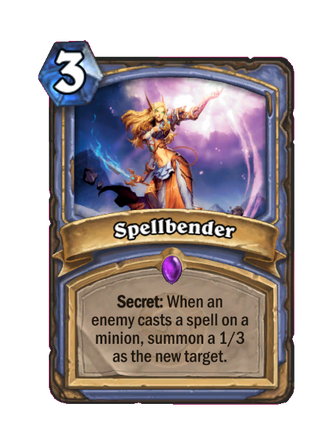 For the minion, see

Spellbender is an epic mage spell card, inducted into the Legacy set, formerly from the Classic set. 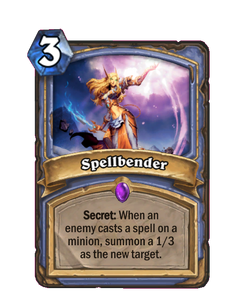 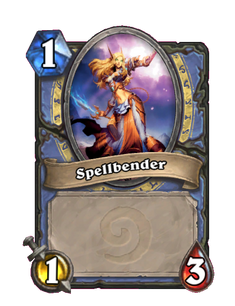 This card has a similar but more niche ability than

Counterspell, letting you intercept enemy spells instead of just cancelling them. In many situations, this card is usually worse: while it can neatly block a

Shadow Word: Death just like Counterspell can, it doesn't block spells with secondary effects, such as the card draw of

Wrath or the side targets of

Explosive Shot. The scenario where it's better than Counterspell is in intercepting positive minion Enchantments, such as

Blessing of Kings or

Mark of the Wild.

While there is no specific character or spell with this name, the Spellbender minion displays a blood elf reflecting a spell. Blood elves are known to have become adept at absorbing, manipulating, and redirecting all forms of arcane, holy, and demonic magics. The Spellbender likely comes from a similar tradition to the Spellbreakers.