This article is using {{Card template}}.
See Help:Style guide/Card for how to edit this kind of article.
Edit this article
Spectral Cutlass
47594 • GIL_672
Regular 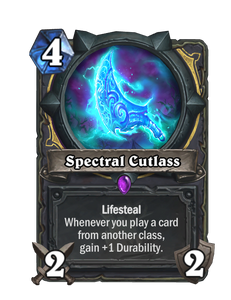 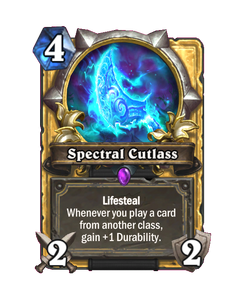 So sharp it can cut through a spectral tomato! 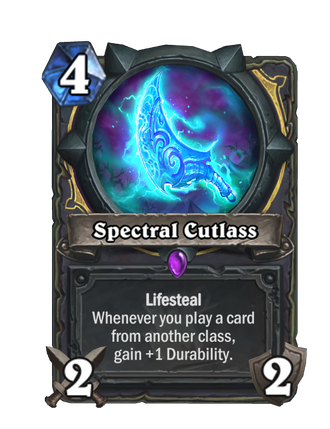 Spectral Cutlass is an epic rogue weapon card, from the The Witchwood set.

Spectral Cutlass obviously has great synergy with any other Rogue cards that allow you to gain cards from other classes, such as

While having poor initial statistics for its cost, in a deck built around pilfering cards from your opponents' class, the Lifesteal in this card can make it a near-inexhaustible tool for clearing smaller enemy minions off the board at little-to-no damage to your hero's health, and by including some cards that can increase its Attack, its power nearly rivals that of

If your deck does not revolve around this mechanic, Spectral Cutlass would be a very poor choice.

It should be noted that, in the off chance a Rogue is able to play an opposing class' hero card (i.e.

The Amazing Reno) Spectral Cutlass will - after that card is played - recognise your Rogue class cards as being from 'another class'.[1] This can allow the weapon's durability to increase to absurd levels, especially with Echo.