Spectator mode, also known as observer mode, is a game mode that allows players to watch other players' matches. Spectator mode made its debut with the game's first expansion, Goblins vs Gnomes, in December 2014. 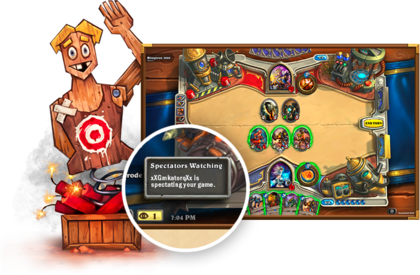 The Starting Game screen is the loading screen displayed while the system prepares to spectate the match, featuring a selection of helpful tips and some comical 'tasks'. It depicts a mechanical element which slowly fills from left to right, supposedly representing necessary steps in preparing for the game. Once the loading bar has filled a certain number of times, the game is ready and battle begins automatically.