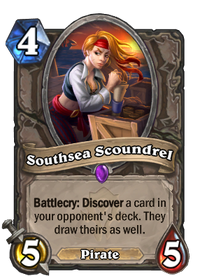 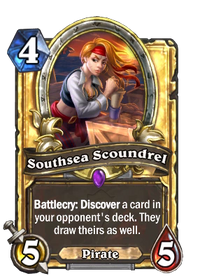 Battlecry: Discover a card in your opponent's deck. They draw theirs as well.
Flavor text

"…and here we see the Southsea Scoundrel in their natural habitat: a den of scum and villainy."

Southsea Scoundrel is an epic neutral minion card, from the Forged in the Barrens set.

Southsea Scoundrel's excellent stats for her Mana cost are somewhat offset by helping your opponent draw a card that might be crucial to their deck strategy or board state. That said, you can take advantage of this effect yourelf by getting a copy of another class card that can boost your combos or provide extra removal options. If your opponent's hand is full, the forced draw of this minion's effect can help to Mill specific combo pieces.

As of Forged in the Barrens, Southsea Scoundrel is the strongest neutral Pirate in the game, allowing her to synergize with Menagerie builds featuring N'Zoth, God of the Deep.