This article is using {{Card template}}.
See Help:Style guide/Card for how to edit this kind of article.
Edit this article
Southsea Deckhand
724 • CS2_146
Regular 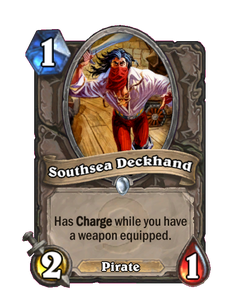 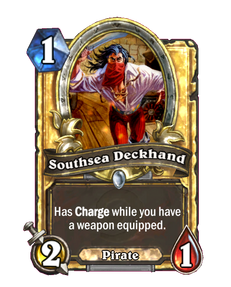 Click here for full resolution image
Has Charge while you have a weapon equipped.
Flavor text

Pirates are into this new fad called "Planking".

Southsea Deckhand is a common neutral minion card, inducted into the Legacy set, formerly from the Classic set. 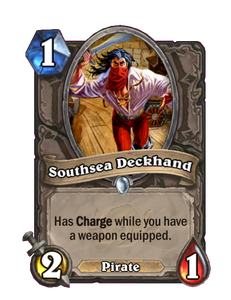 Southsea Deckhand has Charge while a weapon is equipped. This makes him ideally used in a deck that has a lot of weapons. A rogue deck is particularly good due to their hero power Dagger Mastery, which allows them to almost constantly have a weapon equipped.

Note that Southsea Deckhand's ability is not a Battlecry. In particular, if Southsea Deckhand is played and the weapon is then lost (e.g. by attacking with a weapon with only 1 remaining Durability), the Deckhand will lose Charge and be unable to attack, so order of attack can be important. Conversely, it is not necessary to equip a weapon before playing Southsea Deckhand; equipping a weapon at any time while he is on the board will cause him to immediately gain Charge.

Southsea Deckhand is a Pirate, which means he can benefit from Southsea Captain and Captain's Parrot.

As a 1-mana Pirate, it's a great activator for Patches the Pirate, letting you start off the game with 3/2 worth of stats. For rogues, Dagger Mastery with The Coin or Counterfeit Coin on turn 2 will give you a head start on pushing out damage early game.

Additionally, it is a fantastic activator for Bloodsail Cultist. Using only 4 mana, you can give your weapon +1/+1 and attack with a 2/1 Charge minion as well as developing a 3/4.

Southsea Deckhand is a member of the Southsea Freebooters.

The Southsea Freebooters have several bases located along the southeastern coasts of Kalimdor.