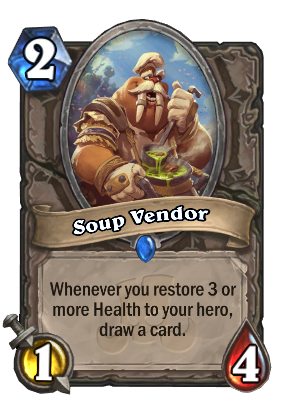 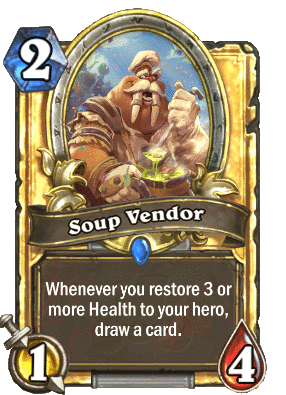 Uncollectible
Whenever you restore 3 or more Health to your hero, draw a card.
Flavor text

Fresh from the floor of the arena!

Soup Vendor is a rare neutral minion card, from the Rastakhan's Rumble set.

Soup Vendor can be obtained through Rastakhan's Rumble card packs, or through crafting.

Soup Vendor is a relatively high-Health 2-drop which synergizes well with Lifesteal and Healing mechanics, which are particularly prevalent in Priest and Paladin. It can be used to dig through your deck quickly using cheap cards and effects.

Paladins can use High Priest Thekal in order to guarantee their hero can be healed.

Rikkar saw an opening, and finally managed to slip past the bouncers and into the Arena! He inhaled the lovely aromas of ozone, hot steel, sand, and the press of thousands of bodies. And what’s better in the muggy, sticky, sweltering jungle heat than. . . soup? The usual funnel cake vendors were absent. Instead, enterprising Tuskarr were competing with the trolls peddling magically frozen ice cream to sell steaming bowls of stew with unidentifiable chunks floating in it.

It seemed that the Tuskarr Bros. had mistakenly shipped a huge surplus of soup to Stranglethorn instead of Northrend, but they were making the most of it. Of course, Rumble fans being Rumble fans, more soup was getting ON the crowd, than was ending up IN the crowd.[1]