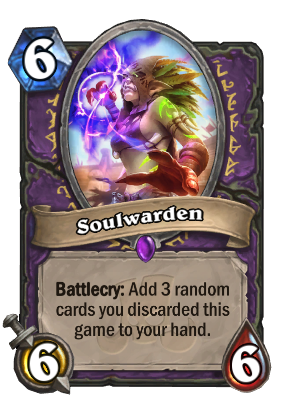 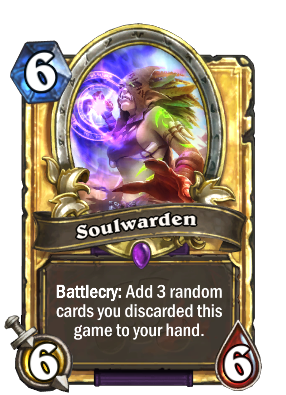 Battlecry: Add 3 random cards you discarded this game to your hand.
Flavor text

Soulwarden is an epic warlock minion card, from the Rastakhan's Rumble set.

Soulwarden can be obtained through Rastakhan's Rumble card packs, or through crafting.

Discard this card for the effect of Expired Merchant, which will add 2 copies to your hand when it is destroyed. When each of those are played, they will then add a further copy to your hand.

Soulwarden appears to be a blood troll.

Blood trolls are an ancient troll subspecies that inhabit the swamp of Nazmir on Zandalar and worship the blood god G'huun. They use blood magic, which corrupts the creatures around them and turns them into blood beasts.

The blood trolls of Nazmir are the monsters that haunt every Zandalari troll child's nightmares, and for good reason. They have been called the "bogeymen" of trolls; in the Zandalari capital of Zuldazar, stories are passed down from generation to generation cautioning children to behave, lest Nazmir's twisted practioners of blood magic come to snatch them from their beds, and those who dare brave the swamp have a habit of disappearing, never to return.