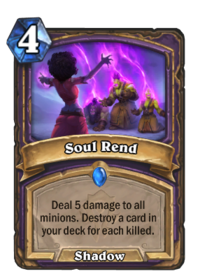 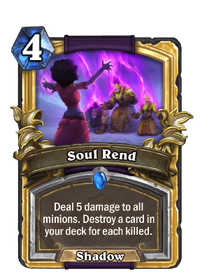 Deal 5 damage to all minions. Destroy a card in your deck for each killed.

About as close to feeling guilt as a warlock's ever going to get.

Soul Rend is a rare warlock spell card, from the Forged in the Barrens set.

Soul Rend is a powerful control card capable of dealing with very large boards. However, its drawback prevents it from being used in a proper control deck.

Instead this card fits much better into decks that plan on destroying their own cards anyway, such as those centered around Neeru Fireblade or Mecha'thun.