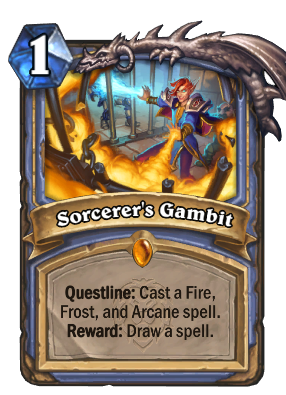 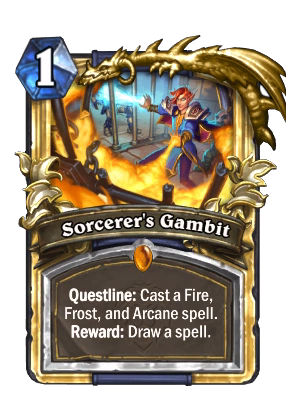 After "the incident," the Stockades really had to reevaluate their anti-mage protocols.

Sorcerer's Gambit is a legendary mage spell card, from the United in Stormwind set.

Sorcerer's Gambit can be obtained by: 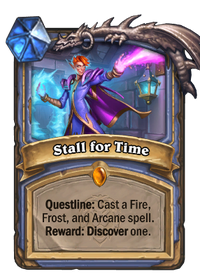 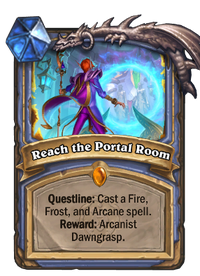 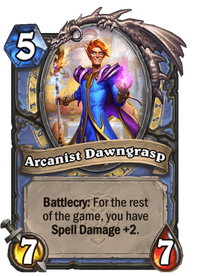 This Questline heavily rewards Mage decks that consist of a lot of cheap spells, allowing for the questline conditions to be completed as early as Turn 5. It is imperative to have a good mix of each Spell school present in the deck. Having a lot of card draw and Discover options such as Runed Orb, Primordial Studies and Wand Thief is critical to finding the tools needed to finish each part of the Questline.

Due to the minion-targeting nature or requirement of many Fire and Frost spells, opposing decks often attempt to play around the deck by not leaving any minions on the field (a mirror match or The Demon Seed Warlock are often major culprits) if they can't swarm the field aggressively. It may be necessary to kill off your own minions with your own Spells to hasten completion of the Questline.

It is advisable to only complete the final questline when you are able to play the reward on the same turn to avoid being countered by cards that can remove cards from your hand such as Mutanus the Devourer.

This card depicts Varden Dawngrasp, having been caught and imprisoned in the Stormwind Stockade after defeated by Alliance mercenaries, as shown in the fight allied with Kazakus. In this card's art, Varden is trying to take risks to escape the Stockade and reach Silvermoon City, backed by Scabbs Cutterbutter - the latter having been imprisoned as well from the events depicted in Marked a Traitor.

Stormwind Stockade, aka the Stormwind Stockades and The Stockade, is a high-security prison complex, hidden beneath the canal district of Stormwind City. Presided over by Warden Thelwater, the Stockade is home to petty crooks, political insurgents, murderers and a score of the most dangerous criminals in the land. A large number of dangerous criminals, including some criminal masterminds and Defias mercenaries, are currently being held in the stockade. However, not so long ago, there was a revolt inside the dungeon, and the prisoners now keep the Stockade under their control.