This article is using {{Card template}}.
See Help:Style guide/Card for how to edit this kind of article.
Edit this article
Sorcerer's Apprentice
614 • EX1_608
Regular 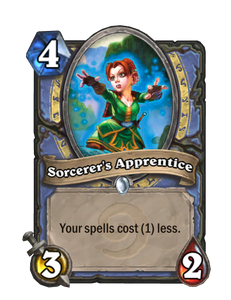 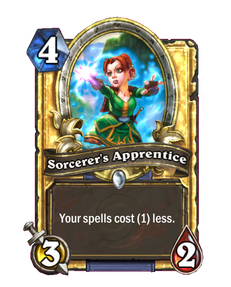 Apprentices are great for bossing around. "Conjure me some mana buns! And a coffee! Make that a mana coffee!" 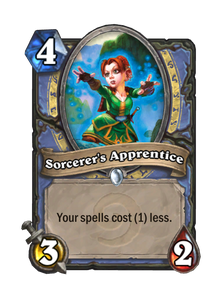 Sorcerer's Apprentice is a common mage minion card, inducted into the Legacy set, formerly from the Classic set. 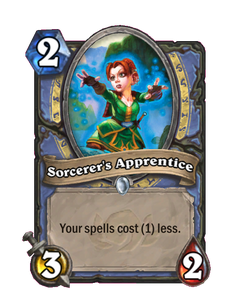 With "good" stats for its cost and a special effect highly relevant to a mage, the Sorcerer's Apprentice makes for a useful addition to any spell-oriented deck. It is most commonly seen in tempo-focused decks which seize board control in the early game, not allowing the opponent to recover.

Notably it reduces the mana cost of both Arcane Missiles and Mirror Image to 0, and Frostbolt and Flamecannon to 1, allowing a mage to control the board and still have mana left to play minions. Multiple Sorcerer's Apprentice can be combined to enable powerful combos, such as infinite Fireballs from Archmage Antonidas.

This card's ability makes it a soft taunt in most situations, making it a good idea to protect it with a Taunt, as most opponent players will try to remove it at the earliest opportunity. However, in the late game it is generally less valuable and therefore less of a target, due to the larger pool of available mana and usually smaller hand size.