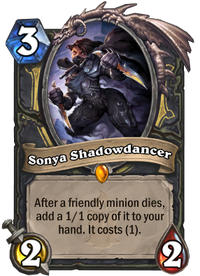 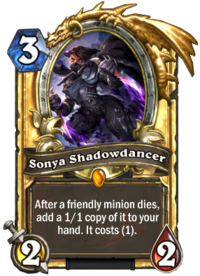 Sonya Shadowdancer is a legendary rogue minion card, from the Kobolds and Catacombs set.

Sonya Shadowdancer can be obtained through Kobolds & Catacombs card packs, or through crafting.

Sonya's effect is useful mainly as a combo enabler and also to return minions with useful battlecries to your hand at a discount. It works well with cards like SI:7 Agent, Bonemare and Vilespine Slayer to pull off cheaper combos. Using a Stonetusk Boar can also pull of interesting combos with Edwin VanCleef as an easy way to clear the board.

She works best when played for tempo rather than as a combo piece. If you have minions on board and the opponent plays a bigger minion, you can trade your minions on board with the opponent's minions to create 1/1 copies of them. Her strength comes in being able to trade a minion with a strong Battlecry already on board like Prince Keleseth to reuse their effects for a much smaller cost.

Sonya is also particularly good in Quest Rogue as she allows you to complete your quest even faster with cards like Patches and Fire Fly. With a 1-mana Charge minion like Stonetusk Boar, it guarantees you complete the quest by turn 8.

Another application for Sonya is in Jade Rogue and Pogo-Hopper decks, who helps generate more copies of those minions to ramp up their stats.

Sonya is unique to Hearthstone.