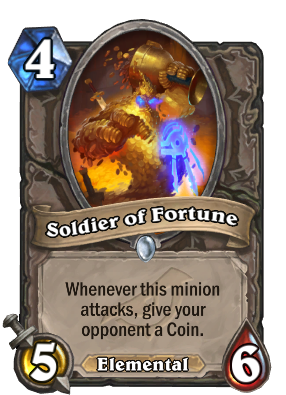 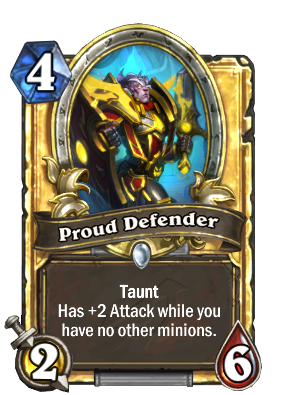 Whenever this minion attacks, give your opponent a Coin.
Flavor text

His allies call him invaluable.

Soldier of Fortune is a common neutral minion card, from the Rise of Shadows set.

Soldier of Fortune can be obtained through Rise of Shadows card packs, or through crafting.

This card is similar to a Hoarding Dragon, but with a slightly different condition. You want to play Soldier of Fortune in a situation where your opponent needs to kill it quickly, meaning they'll only get one or no Coins. Unlike Hoarding Dragon, it's often a good idea to play Soldier of Fortune when you're behind on the board, since you'll be able to trade it into an opponent's minion.

The card can be used to Mill your opponent by giving them multiple Coins. You can use Windfury or Windspeaker to generate multiple Coins each turn.

You can also use Soldier of Fortune with Silence cards like Dalaran Librarian. Using this card has the upside that Silencing it is not a strict requirement on its ability to attack; this is quite risky, however, since the Soldier is only slightly-better than a normal 4-drop, and giving a spell-focused deck Coins is a very bad idea. Generally, a Silence-focused deck can make use of better Silence targets, such as Arcane Watcher -- a 3-mana 5/6, as opposed to Soldier of Fortune as a 4-mana 5/6.

Soldier of Fortune appears to be a pile of treasure animated in the form of an elemental, presumably by the Kirin Tor to protect Dalaran. As such, it is similar to Opulence, a being composed from the animated treasures of the Zandalari Empire fought by the Alliance in the Battle of Dazar'alor raid.