This article is using {{Card template}}.
See Help:Style guide/Card for how to edit this kind of article.
Edit this article
Soggoth the Slitherer
39119 • OG_340
Regular 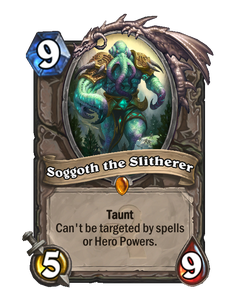 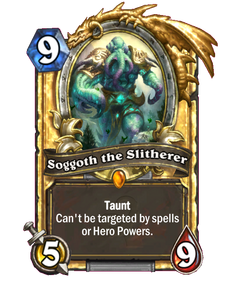 Don't tell Soggoth, but in the future he gets totally owned by the Master's Glaive and his skull becomes a tourist attraction. 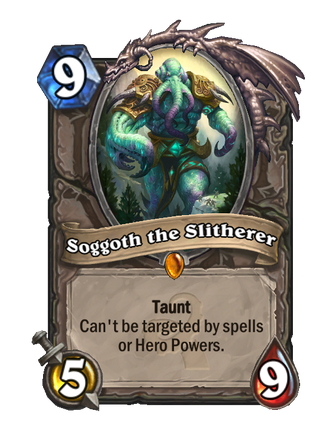 Soggoth the Slitherer is a legendary neutral minion card, from the Whispers of the Old Gods set.

The combination of 9 Health and the untargetable "Elusive" ability makes this minion a very effective Taunt. Its Elusive ability forces the opponent to remove it through either untargeted or area of effect removal, or else through combat.

It should be noted that Soggoth can still be eliminated through other means, such as

The Black Knight and untargeted spells such as

Currently, Soggoth the Slitherer has terrible stats, and cards such as

Soggoth the Slitherer is the name of the slain tentacled creature, a minion of the Old Gods, at the Master's Glaive in Darkshore.

According to Archaeologist Groff, the Master's Glaive was the site of an ancient battle. The titans sent twenty of their stone giants against Soggoth. Of those twenty giants, only one survived. The tablets say that Kronn, the largest of the stone giants, allowed himself to be entangled by Soggoth's tendrils -- just long enough to be lifted close enough to the creature's skull and within reach of Kronn's mighty sword.

In the wake of the shattering of Azeroth the Twilight's Hammer clan sought to resurrect Soggoth. However due to interference of the Ancients and the Alliance they were only able to bring forth a remnant of the being back to alive. During the battle that followed Alliance adventures were able to slay the Avatar of Soggoth, putting an end to the Slitherer and saving Darkshore.