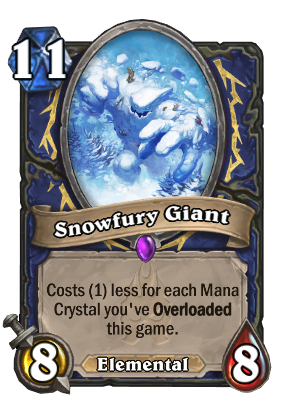 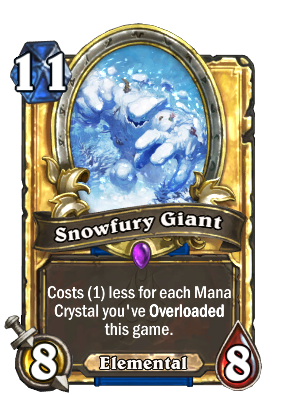 This minion goes all the way to 11!

Snowfury Giant is an epic shaman minion card, from the Knights of the Frozen Throne set.

Snowfury Giant can be obtained through Knights of the Frozen Throne card packs, or through crafting.

This minion is a strong supplementary card to run in an Overload-based deck. To make the most out of this card, include high-Overload cards like Volcano and Drakkari Defender in your deck.

This card has strong synergy with Lesser Sapphire Spellstone. Not only do they share an archetype, its mana cost can be lowered enough to be able to combo with it on a single turn. With Ancestral Spirit, it creates a board that's extremely difficult to remove.

Snowfury Giant is original to Hearthstone. It appears to be a form of ice elemental.