This article is using {{Card template}}.
See Help:Style guide/Card for how to edit this kind of article.
Edit this article
Snowflipper Penguin
42338 • ICC_023
Regular 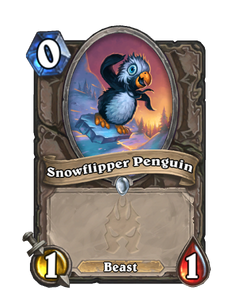 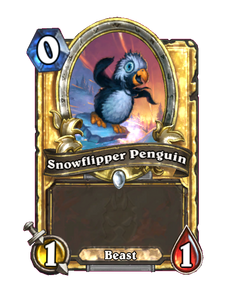 On land, a group of penguins is called a "waddle." 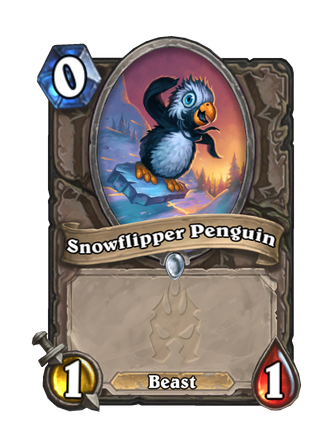 Snowflipper Penguin is a common neutral minion card, from the Knights of the Frozen Throne set.

Snowflipper Penguin is the Beast equivalent of

Murloc Tinyfin. Although it can generally be considered a poor card, its Beast tag means that it can be used as a "free" activator for Beast synergy cards such as

Mark of Y'Shaarj in druid and

Kill Command in hunter. It can be combined with buffs like

Mark of the Lotus to create a threatening board early in the game. It can also be useful to activate Combo cards in Rogue, and refresh abilities such as

Penguins are black and white flightless birds found in Northrend. Some tuskarr breed penguins as farm animals. It seems that a number of wild penguins are led by a large member of the race known as the Penguin King.

Tundra penguins often gather in large groups on the ice for protection against aquatic threats. Unfortunately this makes them easy prey for humanoid hunters seeking meat, skins and other achievements.