This article is using {{Card template}}.
See Help:Style guide/Card for how to edit this kind of article.
Edit this article
Snowchugger
1928 • GVG_002
Regular 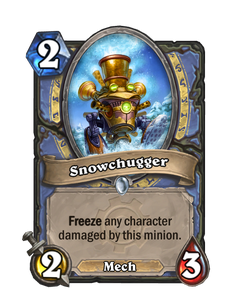 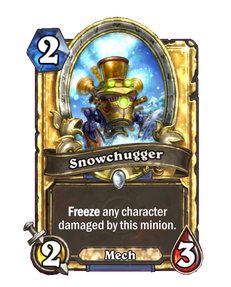 Do the slow chant when he waddles by: "Chug! Chug! Chug!" 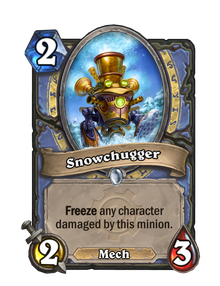 Snowchugger is a common mage minion card, from the Goblins vs Gnomes set.

Works well in Freeze Mage decks, providing a way to slow enemy attacks and activate Ice Lance. If used to attack the enemy hero, can be used on multiple turns, making Ice Lance far less dependent on Frostbolt for its damage. This in turn can free up mana for other damage spells, allowing the mage more flexibility in their burst combos. Even without specific Freeze synergy, this is a solid pick for any Mech Mage deck.

While it lacks the Health to repeatedly lock down enemy minions, it works excellently as an easy way to prevent enemy heroes from attacking early, especially weapon-using Warrior, Druid and Rogue decks, and can allow it to effectively defend itself and other minions from attack.