This article is using {{Card template}}.
See Help:Style guide/Card for how to edit this kind of article.
Edit this article
Snipe
814 • EX1_609
Regular 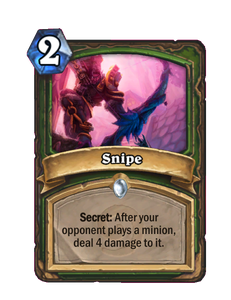 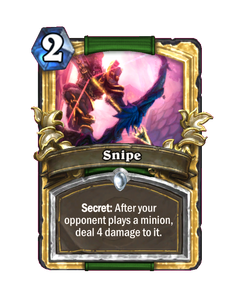 A great sniper hits the spot. Just like a delicious flank of boar. Mmmmm. 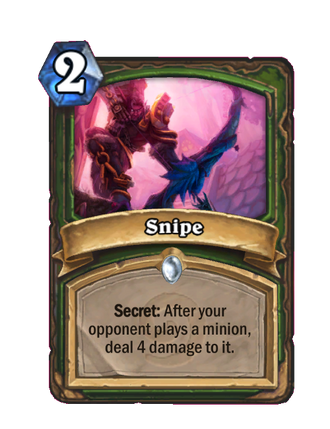 Snipe is a common hunter spell card, inducted into the Legacy set, formerly from the Classic set. 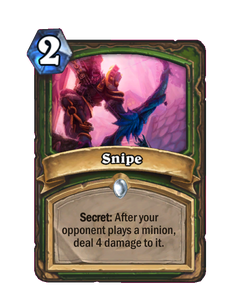 Snipe is a useful early-mid game Secret. The amount of damage it deals for its cost lets it take out most 3-mana or less minions as soon as they're played. It is best played in the early-mid game due to the fact that it essentially allows your opponent to react to it so cannot be used with a follow-up for a guaranteed kill on one of their big minions (anything with more than 4 Health). A downside is that its power scales off late game because it won't be able to one-shot stronger minions.

Arguably Snipe's greatest asset is its ability to remove minions that rely on end-of-turn triggered effects and stop combos that rely on playing a minion first, such as

Cloaked Huntress, and Quest Rogues that need to play a minion before returning it to their hand.