This article is using {{Card template}}.
See Help:Style guide/Card for how to edit this kind of article.
Edit this article
Sneed's Old Shredder
2082 • GVG_114
Regular 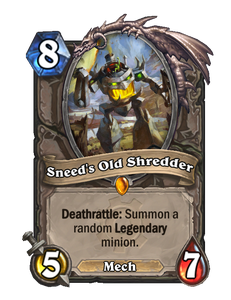 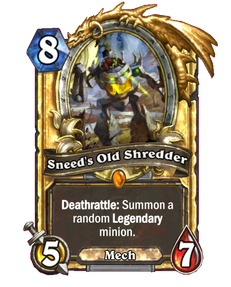 When Sneed was defeated in the Deadmines, his shredder was sold at auction to an anonymous buyer. (Probably Hogger.) 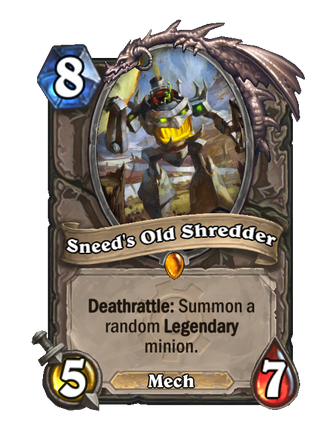 Sneed's Old Shredder is a legendary neutral minion card, from the Goblins vs Gnomes set.

This minion's Deathrattle makes it an excellent target for

Feign Death, or to destroy with

Baron Rivendare on the board.

If the Deathrattle summons a minion with Battlecry, it will not trigger, but you can use cards like

Zola the Gorgon to return the minion to your hand so you take advantage of powerful Battlecries.

A list of collectible Legendary minions in Standard and Wild can be found here.

Sneed was a goblin formerly found in the Deadmines, serving as

Edwin VanCleef's lumbermaster. He was one of the earlier bosses of the instance, climbing into his shredder to assault anyone who dared venture into his chamber.