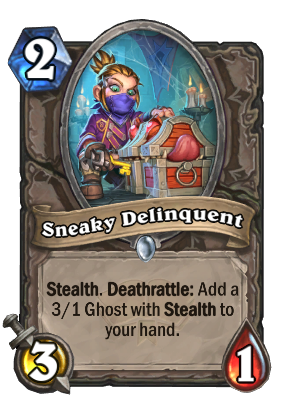 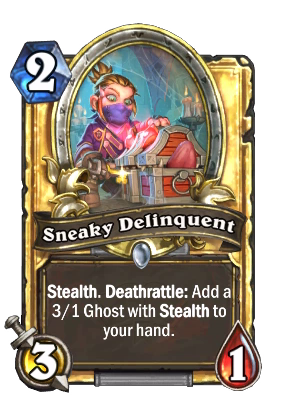 Stealth. Deathrattle: Add a 3/1 Ghost with Stealth to your hand.
Flavor text

All right, now open your lid and say "Ahh!"

Sneaky Delinquent is a common neutral minion card, from the Scholomance Academy set.

Sneaky Delinquent can be obtained through Scholomance Academy card packs, through crafting, or as an Arena reward. 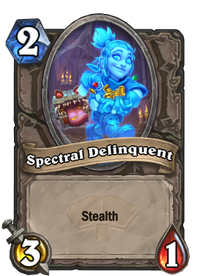 Sneaky Delinquent is a solid aggro card. It almost always deals at least 6 damage to the enemy hero, with two 3/1s with stealth. Even if the first half is dealt with, the second 3/1 will require another answer from your opponent. Rogues can make especially good use of the stealth, combining it with Ashtongue Slayer and Greyheart Sage for extra value.

In Arena, Sneaky Delinquent sets up good trades, being able to contest two 3-health minions by itself.

Sneaky Delinquent was a gnomish student of Scholomance Academy, who died trying to loot a chest which turned out to be alive. As a ghost, the Delinquent has a severed hand due to the chest biting it off, but succeeded in grabbing her loot in the end.