This article is using {{Card template}}.
See Help:Style guide/Card for how to edit this kind of article.
Edit this article
Snake Trap
455 • EX1_554
Regular 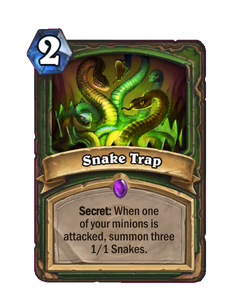 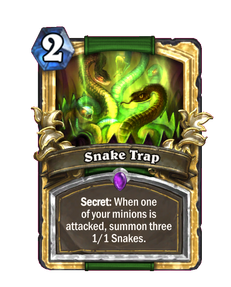 Why did it have to be snakes? 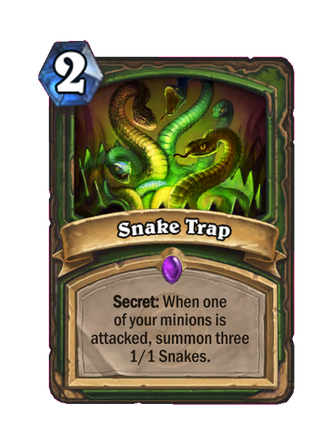 Snake Trap is an epic hunter spell card, inducted into the Legacy set, formerly from the Classic set. 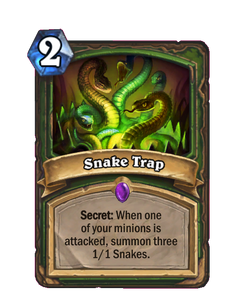 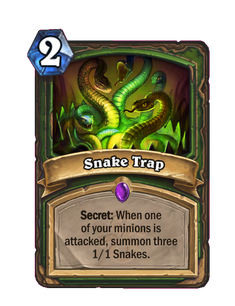 Snake Trap are obtained for raising hunter to level 8.

Snake Trap (Core) is uncraftable and cannot be crafted or disenchanted. 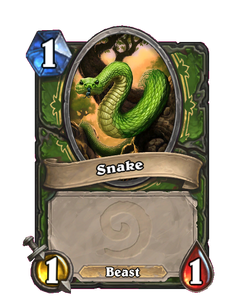 Knife Juggler, potentially triggering the minion to throw 3 knives when the trap is triggered. If the knives hit the attacking minion itself, it can even be destroyed mid-attack, preventing it from dealing damage to its target. However, the opponent can still remove the Knife Juggler using a spell or other effect without triggering the Secret.

King of Beasts for an easy +3 Attack boost.

Snake Trap is a glyphed hunter ability which places a trap at the target location. When triggered, it releases several venomous snakes which will move toward and attack nearby targets, applying a Crippling Poison that reduces movement speed. The snakes last for up to 15 seconds before expiring.