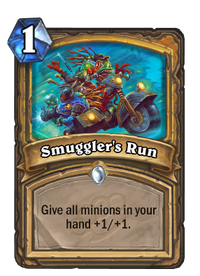 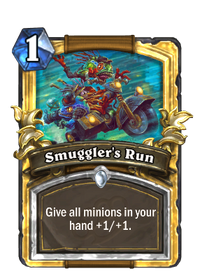 One of the most famous busts in Gadgetzan’s history happened on Smuggler’s Run, where Sergeant Sally apprehended a cadre of Grimy Goons transporting a massive number of illegal fish heads.

Smuggler's Run is a common paladin spell card, from the Mean Streets of Gadgetzan set.

Smuggler's Run can be obtained through Mean Streets of Gadgetzan card packs, or through crafting.

This card is a strong choice for decks built around the "handbuff" effect, or in Arena (where decks typically contain more minions than spells or weapons). Playing this on turn 1 while holding several minions will give you a big value advantage in the follow-up turns.